If you're building for the web, you've likely heard the term "Progressive Web App" by now.

Its definition is a bit vague and somewhat contentious perhaps, but generally the idea is that it's a web page that has "taken all the right vitamins" so it can behave more like an app you installed from the app store. It starts as a normal tab in your browser and if it has all the right stuff the browser will prompt visitors if they'd like to "Add to Homescreen", which up to this point has largely equated to being a glorified bookmark.

Once opened from the Homescreen it hides the browser UI and appears as its own app when switching apps, etc.

If you're not familiar with the challenges currently facing native app developers, here are a few:

PWAs are an attempt to hit the sweet spot balance between web and native. Fast, native-app-like experiences without the list of problems above. The simple act of opening one of these Webpages With Special Sauce™ means you've already downloaded "the app" so there's no need for an App Store run-around where you ask users to download a 50mb binary over their flaky mobile connections just so they can read your web content. Arguably, it's really more like "saving experiences" you're currently having in your browser for easy access later, even if you're offline. This ability for a web page to graduate to becoming a full app-like experience appears, by all measures and case studies that have come out so far to be pure magic juice for businesses who care about you know, those silly little useless metrics like conversions or retention or whatnot. My professional interpretation of the data I've seen on this so far is: OMG.

But don't take my word for it, watch this instead.

PWAs are the entire reason I switched to Android after being on iOS for 7-some years. The blog post I wrote about why I switched apparently struck a nerve. It had 80k+ uniques in the first two weeks and led to several response posts by folks like Jeremy Keith, et. al. I'm not saying this to brag (well, maybe just a little), but the point is, this stuff is a big friggin' deal and we have good reason to be excited about it!

For me personally, building web apps that feel like native apps is something I've been trying to do for ages. Exhibit A: this screen cap I made about something I built for this seven years ago!

Let's just say the concept has just always made a lot of sense to me. However...

The implementations have historically fallen short

Of course, building app-like websites are hardly a new idea. This is how Steve Jobs originally proposed folks build for the iPhone! But as I explained in more detail in my post. I don't believe the incentives made sense for platforms to do this kind of thing at the time.

I'll spare you repeating my other post, you can just go read it if that sounds interesting.

The time has come

PWAs have already come a long way even without the changes I'm discussing here. They're already solidly in the "very likely a much better investment than building native apps" category for most companies considering building mobile apps.

But, as awesome as PWAs are on Android, they still have had a few annoyances that keep them from being truly "first class citizens" on the platform.

So here's the interesting thing about all these problems: most, if not all of them, stem from the fact that "installed PWAs" are not truly apps in the eyes of the operating system!

Soon "installed PWAs" will actually be APKs, as in real Android apps will be created and side-loaded into the OS by Chrome. This means they won't be websites that have been "Add to Homescreen"-ed they'll be actually generated and installed on the fly, and with the language to match.

It was rather subtly announced by Paul Kinlan, please watch his talk from Chrome Dev Summit the specific part I'm referring to starts right here. It seemed like not a lot of people even caught it. Personally, I erupted into spontaneous applause (in fact, you can hear me on the video right here), but I think, given that this was the last talk of the conference and a lot of folks were kinda zoning out I felt like perhaps the implications of this were a bit lost.

So, let me be clear: I think this is a BIG FRIGGIN' DEAL for the web and worth being very excited about!

Beware, I'm told the way it's implemented as I will describe below is not its final state. Apparently the whole "side-loading" bit will be smoothed over and be more seamless. There's a list of bugs related to all of this stuff, you're curious.

It's not landed yet, it's currently behind a flag in Canary so details are sure to change, but you can try it today if you've got an up-to-date copy of Android and Chrome Canary installed.

Go to chrome://flags and enable "Improved add to Home screen": 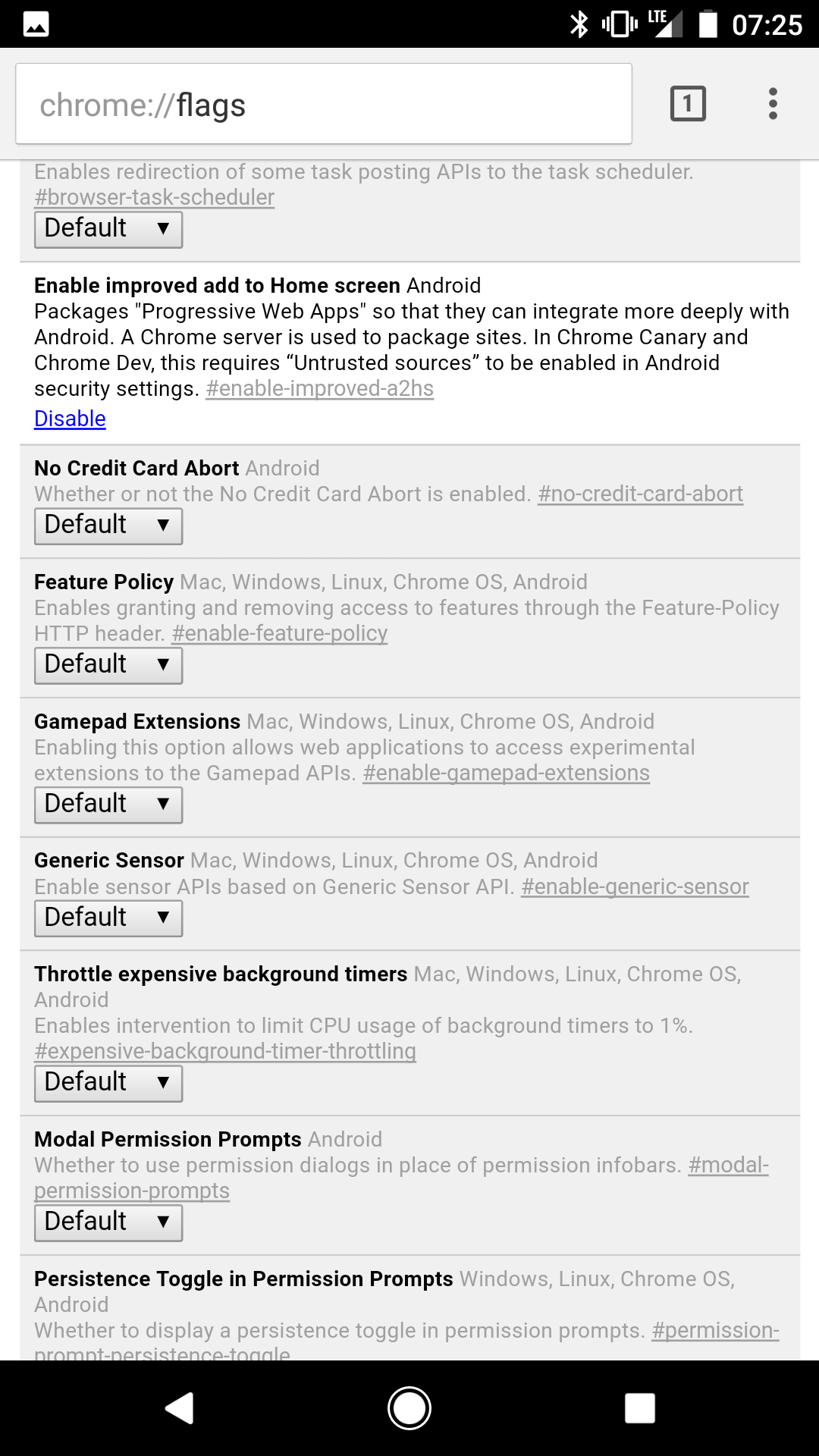 I'd recommend something like paperplanes.world and select "add to Homescreen" from the menu. You'll see this: 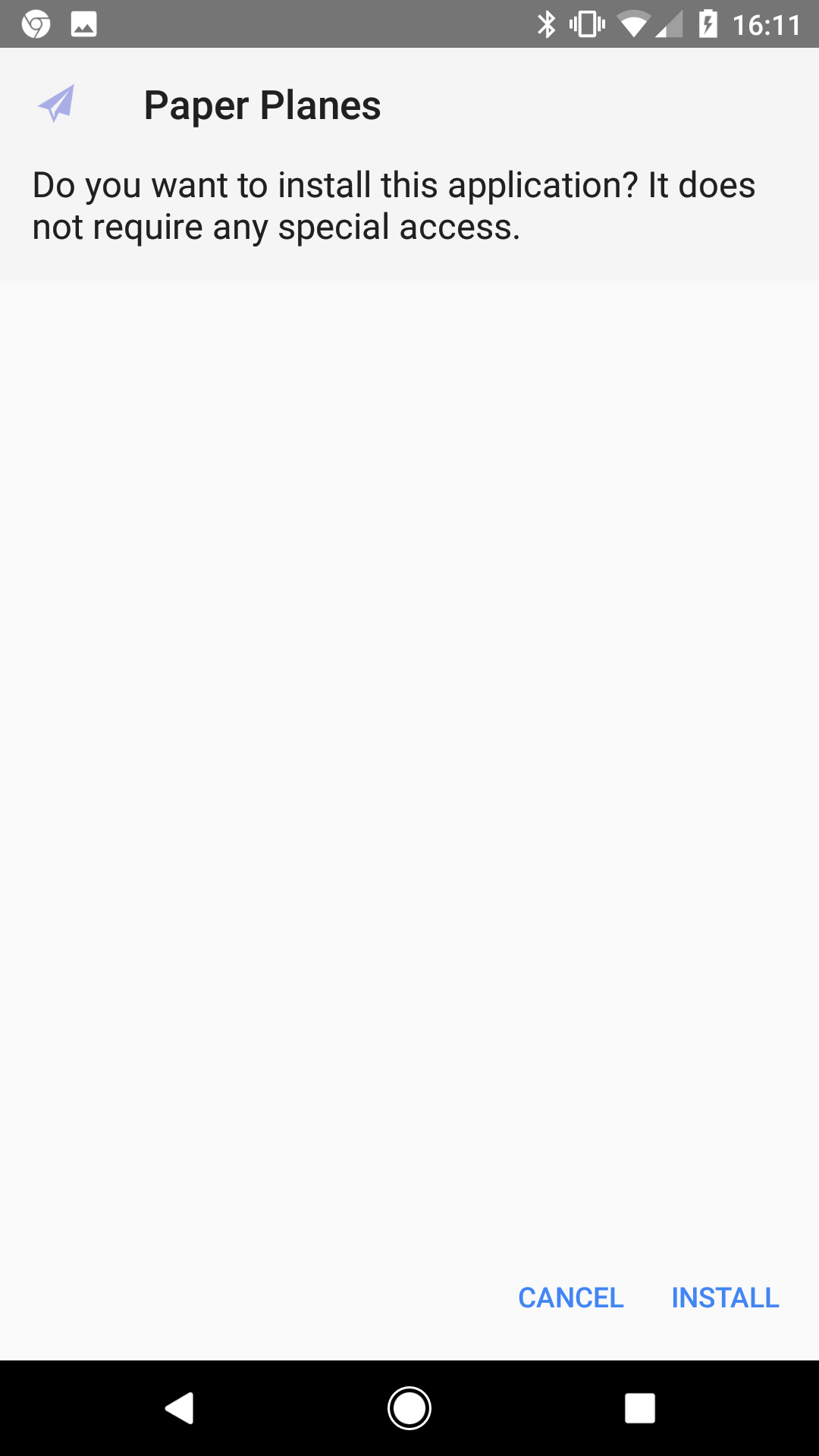 Note: The language is all about "installing this application" because you're actually side-loading an Android APK here!

Next you get this "app installed" language: 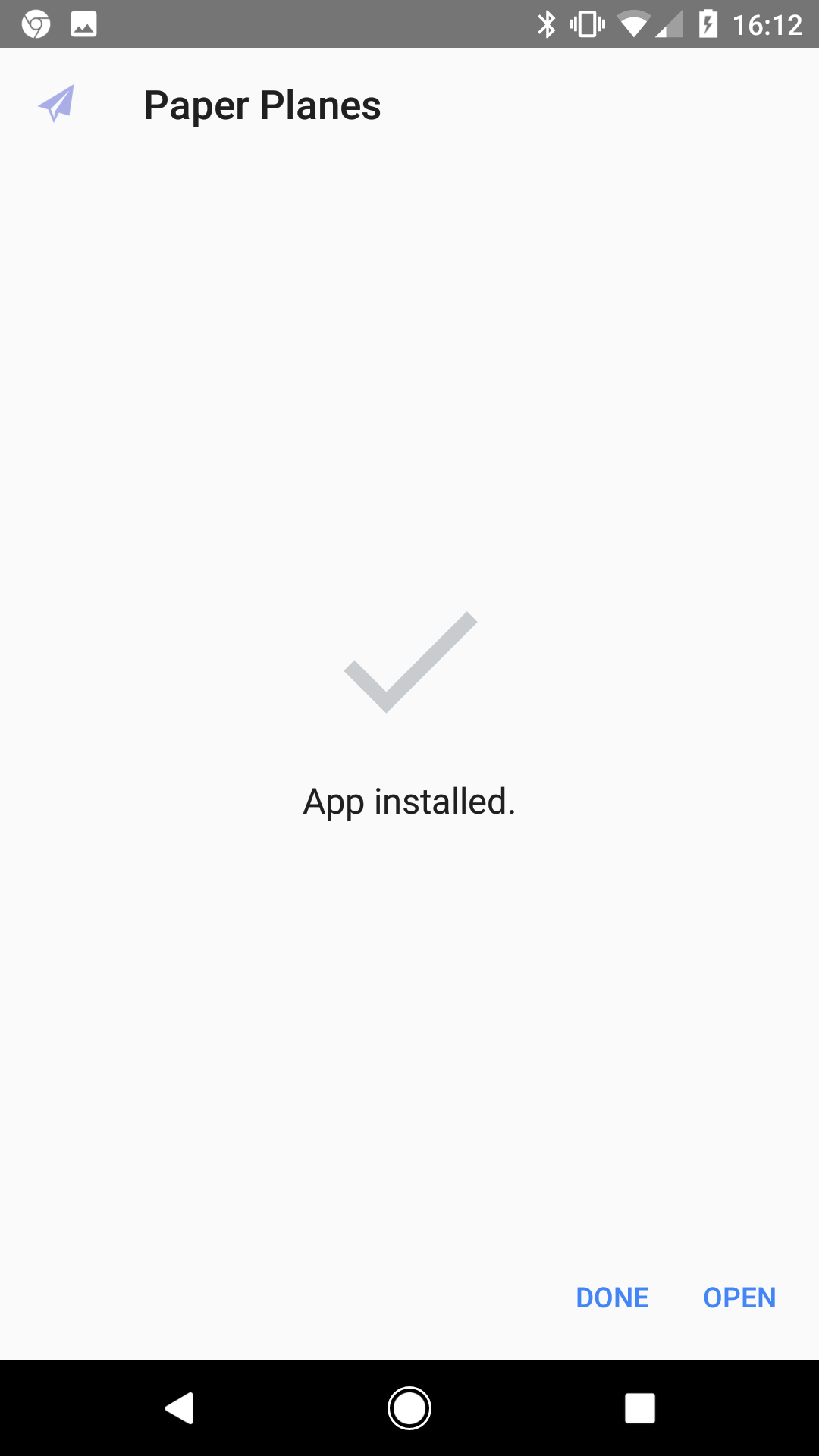 And now, you've actually got an APK installed for this web app!

Which means it's also listed in my "all apps" view: 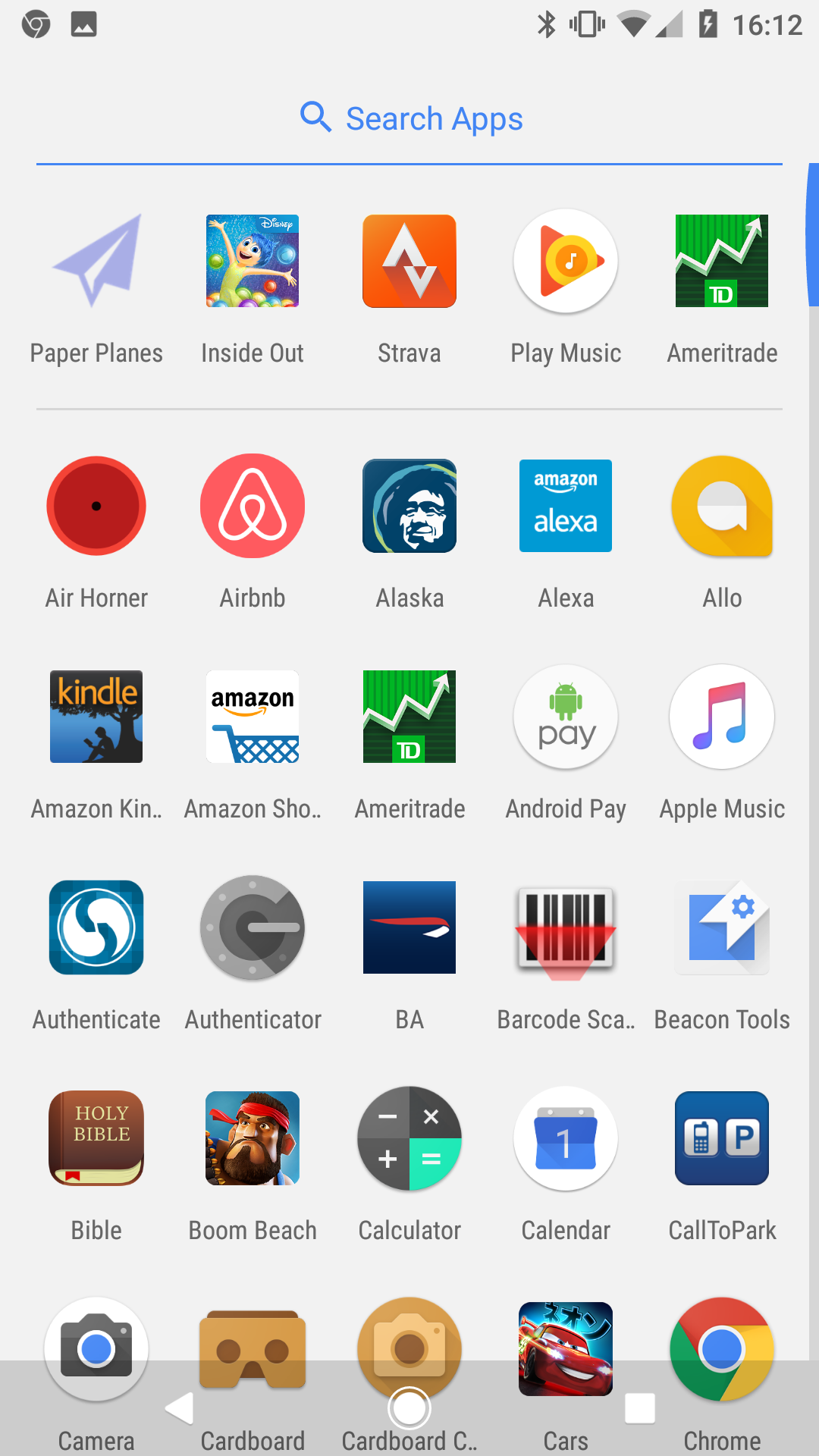 You can even view app info like other apps: 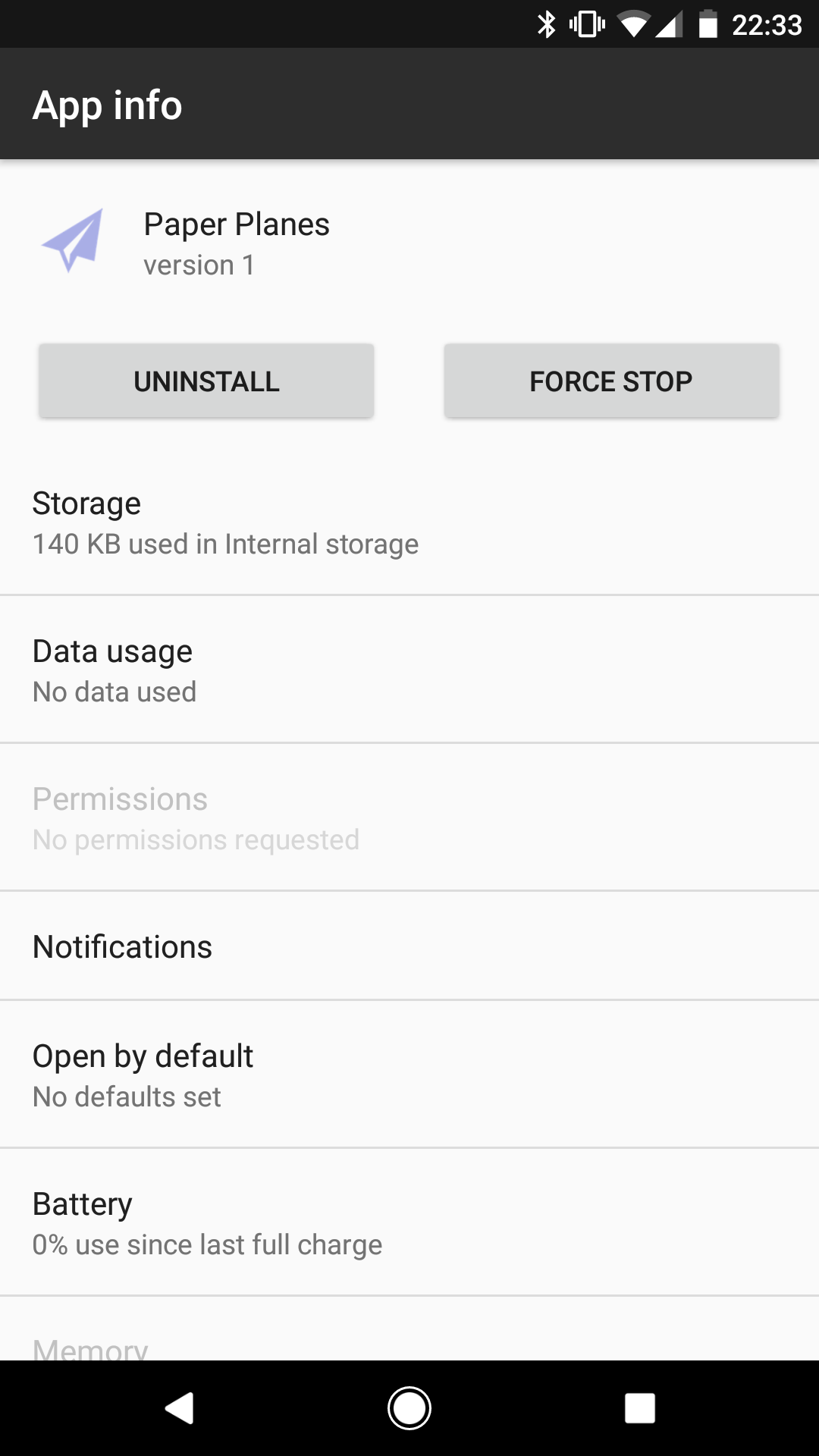 3. Why does any of this matter?

A platform with over 1 billion monthly active mobile is working to make web apps first class citizens on that platform in every way they can. This is a huge deal. But, to be clear this isn't about Google and Chrome, sure the term Progressive Web App may have been coined and promoted by Googlers. But, don't confuse this with just being a Google Thing™.

I'm pretty sure the folks at Microsoft, Mozilla, and Opera would take that personally. Friggin' Steve Jobs promoted the basic idea. Microsoft has committed to listing PWAs in their store! Which is actually more than Google has committed to doing though, if I were a betting man, I'd say this little APK tweak is a step they're taking in that direction. But regardless, the point is this isn't about Google, it's a Web Thing™.

Right now the Google folks are definitely among the group pushing the envelope with this concept the hardest. But none of this would get me excited if it were not based on extending the reach of standards-based web applications onto their host systems.

As someone who's been working in this space for a long time I'm super excited to see metrics support and economic forces all finally seem to be aligning behind this idea, its time seems to finally have come.

It's a good time to go all in on the web. I can't wait to see what the next few years bring. Personally, I feel like the web is well poised to replace the majority of apps we now get from app stores.

Oh, and for those of you worried about Apple, don't be. They don't like to be the laggard and there are positive signs that they're coming around to the idea. I think the best way to make that happen is to building amazing web experiences that make choosing to invest in building native apps for App Stores seem arduous and unnecessary. Apple certainly don't want Safari to be the new IE, so watch them closely and help speak out where you can.

If you want to (nicely) disagree with me or if you just think there may be something to this whole Web Thing™ I'm @HenrikJoreteg on twitter you can hit me up there.